“Global smartphone shipments grew a solid 5 percent annually from 374.9 million units in Q3 2016 to 393.1 million in Q3 2017. The global smartphone market has settled into a steady rhythm of single-digit growth this year, driven by first-time buyers across emerging markets of Asia and upgrades to flagship Android models in developed regions such as Western Europe.”

“Samsung shipped 83.4 million smartphones worldwide in Q3 2017, rising an impressive 11 percent annually from 75.3 million in Q3 2016. This was Samsung’s fastest growth rate for almost 4 years. Samsung’s growth is being driven by strong demand for its A, J and S series models across Latin America, India and elsewhere. Apple grew a below-average 3 percent annually and shipped 46.7 million smartphones for 12 percent marketshare worldwide in Q3 2017, holding steady from the same level a year ago. Despite a delayed launch of the flagship iPhone X model, the new iPhone 8 portfolio was relatively well received in major countries such as Germany and China.”

“Huawei maintained third position with 10 percent global smartphone marketshare in Q3 2017, up from 9 percent in Q3 2016. Huawei continues to close in fast on Apple and the battle for second place in the smartphone market will be tight next year. Huawei is performing well across Asia, Europe and Africa with popular Android models such as the P10 and Nova 2.”

“OPPO shipped a record 31.4 million smartphones and maintained fourth position with 8 percent global marketshare in Q3 2017. OPPO grew an impressive 45 percent annually in the quarter, taking share from major rivals like ZTE and TCL-Alcatel across China, India and Europe. Xiaomi soared 91 percent annually, taking fifth place with 27.7 million shipments for a record 7 percent global smartphone marketshare in Q3 2017, up from 4 percent a year ago. Xiaomi’s range of Android models, such as the Redmi Note 4, is proving wildly popular in India, snatching volumes from competitors such as Lenovo and Reliance Jio. Xiaomi is outgrowing almost everyone, and if current momentum continues, Xiaomi could catch or overtake OPPO, Huawei and Apple to become the world’s second largest smartphone vendor in 2018.” 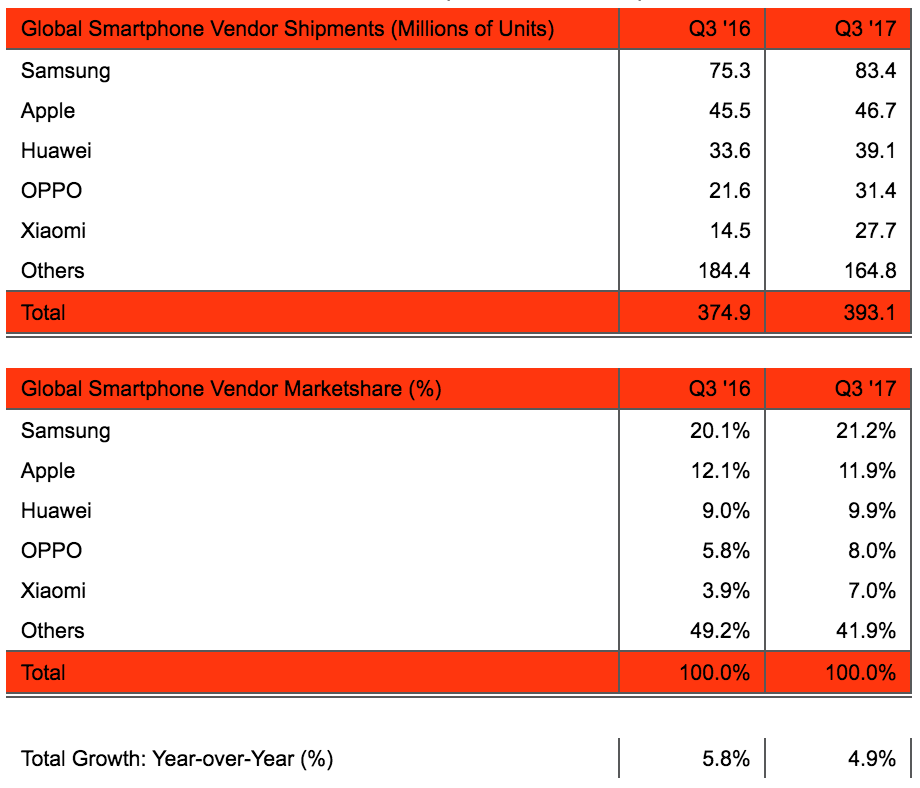 The full report, Global Smartphone Shipments Hit 393 Million in Q3 2017 , is published by the Strategy Analytics Wireless Smartphone Strategies (WSS) service, details of which can be found here: http://tinyurl.com/y8fd7djk .