Fujitsu today announced that its prototype beacon(1) has obtained the world's first ucode tag(2) certification for a beacon from the TRON Forum(3) . This beacon, which is more easily mass produced, will now be capable of globally unique ID transmission, for more reliable location information services. Furthermore, because this certification complies with international standards, it can be linked with all types of map data that form the foundation for delivering services.

This beacon prototype will be exhibited at the 2015 TRON Symposium -TRONSHOW-, to be held from December 9 through December 11, 2015, at Tokyo Midtown.

Conventional beacons require either a built-in battery, which must be changed regularly, or a nearby outlet to continually provide the power necessary to transmit signals, requiring a great deal of effort for operations management, such as regular maintenance or extensive installation work. Furthermore, as most beacons have a hard cover such as plastic, there are issues with deployment to locations where it is necessary to blend into the scenery or with the danger of a beacon falling.

Moreover, because ordinary beacons transmit IDs that were each independently systematized within a variety of industries and organizations, there is a possibility of ID duplication, limiting their use to within each independent system.

Features of the Prototype 1. Improved potential for mass-production with a simple circuit layout and a redesigned manufacturing process

With the recently developed beacon(4) , a conductive paste is printed on an electric circuit wiring pattern, to which electric components are mounted and connected with conductive adhesive. The paste and adhesive materials were selected to enable mass-production with existing production facilities.

With the beacons currently under development, the circuit design was refined to enable mass-production with more general electric components. In addition, the drying process for the paste and connections between electric components has been thoroughly optimized for time and temperature, with the aim of more efficient production. This will shorten the previous manufacturing time, also enabling cost reductions.

This is the world's first certification of a beacon for ucode Category 2(5) of ucode tags from TRON Forum, an organization dedicated to the standardization and promotion of core technologies for ubiquitous computing. By receiving this certification, the beacon is now capable of using IDs compliant with international standards, making possible safer, more secure, and highly reliable location information services, such as guidance support for the visually impaired within stations or around town, or efficient seat management for stadiums. Furthermore, beacons were previously installed only on fixed structures such as buildings, but because the new prototype features the ability to change shape, it can also be affixed to clothes and shoes, making it easier to attach to people or mobile platforms. It then becomes possible to easily grasp the location of such people and things to provide them with support. Table: Differences between ordinary beacons and this prototypeOrdinary BeaconsPrototypePrinted Circuit Board 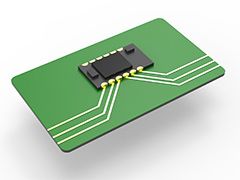 Going forward, Fujitsu is aiming to establish a manufacturing process with even greater production efficiency, leading to early commercialization. In addition, they plan to create new location information solutions combining this beacon with sensing technologies. Figure: Potential future product (using the beacon in combination with sensors such as heart-rate sensors and accelerometers)

(Chair of the TRON Forum, Director of the YRP Ubiquitous Networking Laboratory)

"Fujitsu has now developed a beacon that has been certified as a ucode tag. In the world of IoT, it is necessary to identify individual things and locations, and a beacon is an effective device for that purpose. However, conventional beacons can be difficult to install and maintain, so I had been expecting that R&D conducted by industry would come up with a solution. Now this beacon has the potential to do just that, and together with moving a step closer to the realization of an IoT world, I feel it demonstrates the fundamental strengths of Japanese technology. I'm looking forward to this beacon being put to actual use, and to its spread around the world."

Equipment that uses signals transmitted by wireless stations to provide all types of information, especially location, to other devices.

A specification standardized by TRON Forum. ucode, in compliance with the International Telecommunication Union (ITU) H.642 international standard, is a system for assigning ID numbers to differentiate individual things and places. ucode's ID issuance and management is carried out by TRON Forum. Devices that store a ucode are called a ucode tag. Beacons as ucode tags fall under the Packet Format Specification for Bluetooth LE ucode Marker, announced by TRON Forum in December, 2014.

ucode has an interface category classification basis for each feature, where Category 2 is defined as "Active RF tag (RFID tags or sensor nodes that have their own power sources, e.g. a battery, and communicate via RF)" in the "Standard of ucode Tag Interface (Category 2)," published by TRON Forum.