You and your robot 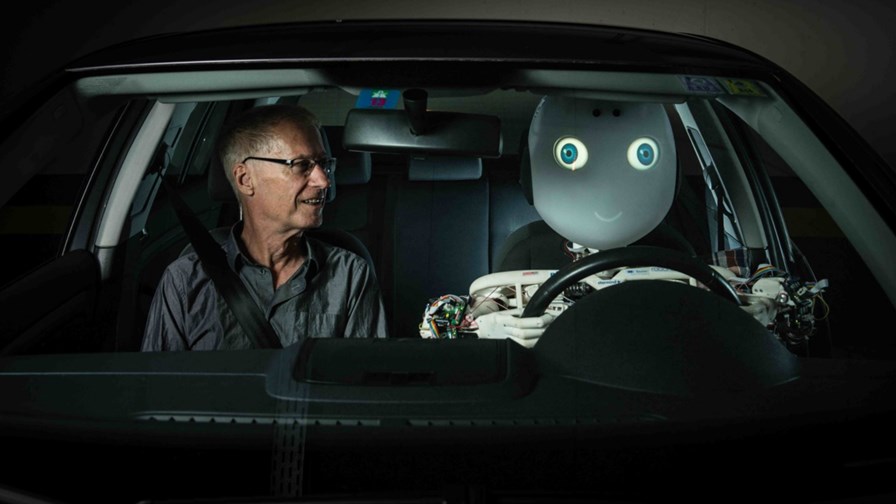 About 15 years ago, at an ITU conference and exhibition in Singapore, I remember writing a piece for the daily (paper in those days) which played about with the similarities between tamagotchis (all the rage) and the then emerging, feature phones. One was a device that needed constant tending, made beeping noises when ignored and so on…   the other was a toy.

Even then it was notable how much phone fondling went on whenever two or more mobile owners got together to stare down into their respective devices, to peck away at the keys, exchange anecdotes and so on. Today that has intensified: people seem obsessed with their smartphones and some even feel panic and (allegedly) real pain when separated.

With that in mind, let’s think about robots. In particular, how appealing and all-absorbing they’ll become when designed to be humanlike, artificially intelligent and able to walk, talk, drink, burp and manipulate objects, just like humans?

And if you thought robots and robot speculation must have little to do with telecoms, think again. The most important aspect of robots will be their need to communicate back into the cloud. Whatever they do, they’re going to remain huge consumers and generators of data as the artificially intelligent ones learn and share information with each other.

One of the world’s foremost robot experts is Prof Rolf Pfeifer (see above, Rolf pictured driving with his robot, Roboy). Rolf will be addressing the  ITU’s Leadership Summit on the Future at the upcoming ITU Telecom World 2014 in Doha, 7-10 December. The summit has been designed to inform decision-makers from government and industry on a broad range of topics including the Internet of Things, Human-machine scenarios, hyper connectivity and hyper-efficiency, artificial intelligence and the future of privacy and  digital rights (see the speaker list here).

I spoke to him recently by phone and if you ever harboured the slightly sniffy notion that robots were a sideshow, really just fit for a fantasy romp with Arnie in Terminator 2, then 20 minutes with Rolf should set you straight.

“We wouldn’t be where we are today if it wasn’t for the robots,” says Rolf. “They have already changed our lives in fundamental ways.”

They’ve mostly done it hidden away on the factory floor, though, laboriously affixing car doors, wielding welding kit or spraying paint about. But that's soon going to change...

Robots will soon be on the move

“Now they are starting to leave the factory floors. More and more of them in increasing numbers so it’s important that we interact with them,” Rolf tells me. It doesn't take long talking with Rolf to sense a sort of reverence towards robots, almost as if they were a species.

“If you look at the reputation of robots - it's not exactly great ,” he says, “We have ‘Terminator’, we hear about war drones and we have them profiled as job-takers. With my current work we want to send  a message about the robots that will live with us. It is about emotions too.”

At that point I introduced the idea of the robot as the cultivated, know-it-all companion, a cross between Hal and Jeeves the Butler.

"Now, if you look at the movies like I, Robot, using computer graphics you can do marvelous things. The robots can be made to look as if they can move about and exhibit motor sensory skills just as polished as ours.  But in fact it’s exponentially more complicated. The robot has weight, the arm has weight which must be calculated. It has to balance, readjust itself and so on. So they can easily be good at facial expressions, but just can’t  pour a glass of wine. That’s a  big challenge.”

So let’s go way ahead. How are robots going to live with us and are we going to find it a big challenge? And the big one: will they eventually take us over.”

Now that’s probably only about the 20 thousandth time that Rolf has been asked the ‘humans as robot slaves question’, but he doesn’t bat it away with a sneer.

“Once they’re living with us, that's obviously when robots take over,” he says. “Think about it, we’re dependent on them, we can't pull the plugs so in a sense we’ve already been enslaved, just as we individually can't pull the plugs on our computers. Can’t be done because the world would simply fall apart.” So we and the robots become co-dependent.

‘Virtual ‘is a concept we in telecoms and IT have had to come to understand over the past decade or two. According to Rolf, by creating a robotic or artificial intelligence (forget the mechanical side for just a moment) and enabling it to learn, we are creating a virtual organic entity. Virtual life, essentially.

“The robots will share knowledge but they will also naturally compete with each other.  The ‘best’ robots will be in more demand and will be reproduced in greater numbers,” Rolf tells me.

“So you’re saying there is a Darwinian underpinning?” I ask. “That once you have the intelligence, the intelligence sharing and the natural selection, then even though it’s electronic rather than biological, Darwinian principles will just naturally assert themselves?”

One of the interesting things here might be how we take our undoubted propensity to anthropomorphism with animals, and graft that over to robots.  Will we grant robots protections and even ‘rights’ (as we might argue we’re already doing with animals) and then, will this impulse be seen as a strange, neurotic and sentimental deviation?

If we accept that we create (or rather orchestrate, seeing these intelligences will ultimately develop themselves) intelligent robots, won’t we then be drawn to granting them rights not just because they’re cute and we’re sentimental, but because we discern that they are sharing something valuable with us simply by their having meshed with our lives, learned our behaviours, developed behaviours of their own that we find appealing, even shared our thoughts….  I think a crime of roboticide would soon be on the statute books.

Rolf Pfeifer is currently a “Specially Appointed Professor” at Osaka University, Japan, and a visiting professor, at Shanghai Jiao Tong University, China. He is a member of the board of several Artificial Intelligence and Robotics companies and co-founder of the National Competence Center Robotics, Switzerland.

He is a pioneer of the fields of “embodied intelligence” and “soft robotics” which have had a decisive impact on artificial intelligence and robotics. His book “How the body shapes the way we think” (MIT Press, 2007) has been published in English, Japanese, Chinese, Arabic, and French.

In 2009 he started the “ShanghAI Lectures”, an experiment in global teaching, which now involves over 50 universities from all over the planet. He developed the humanoid “Roboy”, which has attracted worldwide media attention, and he is currently pursuing the “Robolounge” project, where robots will take care of the well-being of the customers, to be launched in an Asian metropolis in 2015/2016.