[Shenzhen, China, October 13, 2016] Huawei launched the industry's first DOCSIS prototype at SCTE Cable-Tec Expo 2016 in Philadelphia, US. This prototype supports a 3 GHz spectrum and a 25 Gbit/s downstream rate. It also represents a new milestone of coaxial cable technologies, being the center of attention at the Expo. 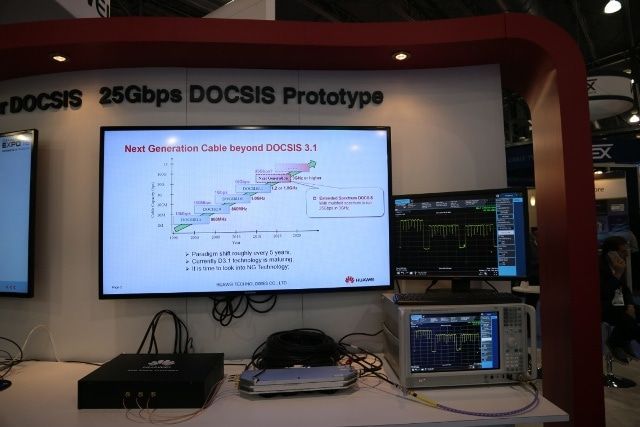 With the arrival of the Gigabit era, ultra-bandwidth technologies based on multi-media are constantly being innovated, supporting higher and higher access rates. At present, the widely deployed DOCSIS 3.0 technology supports a maximum of 32 channels and 1.6 Gbit/s sharable downstream bandwidth. The DOCSIS 3.1 solution, with a 1.2 GHz spectrum, has gradually been put into commercial use since 2016. Thanks to multi-channel bonding and orthogonal frequency division multiplexing (OFDM) technologies, DOCSIS 3.1 enables a maximum downstream rate of 10 Gbit/s. This DOCSIS 3.1 technology has already been deployed for TDC (Denmark) and Vodafone (New Zealand).

To fully explore the potential of coaxial cables, Huawei has developed new technologies and extended the spectrum of the coaxial cable to 3 GHz for the first time. These technologies address the challenges brought by large attenuation, great slope, and severe data distortion in the event of bandwidth amplification. The DOCSIS 3.1 prototype, which is developed based on the high-frequency bandwidth amplification and digital non-linear compensation technologies, supports a maximum downstream rate of 25 Gbit/s. Moreover, it is expected that, with the latest full-duplex self-interference cancellation technology, symmetric upstream and downstream rates of 25 Gbit/s can be achieved. This result boosts the confidence of MSOs in reusing current coaxial cables to build Gigabit networks. CableLabs and MSOs (such as NET, Cablevision, Rogers, Megacable, and J:COM) have watched DOCSIS 3.1 prototype at the Expo.