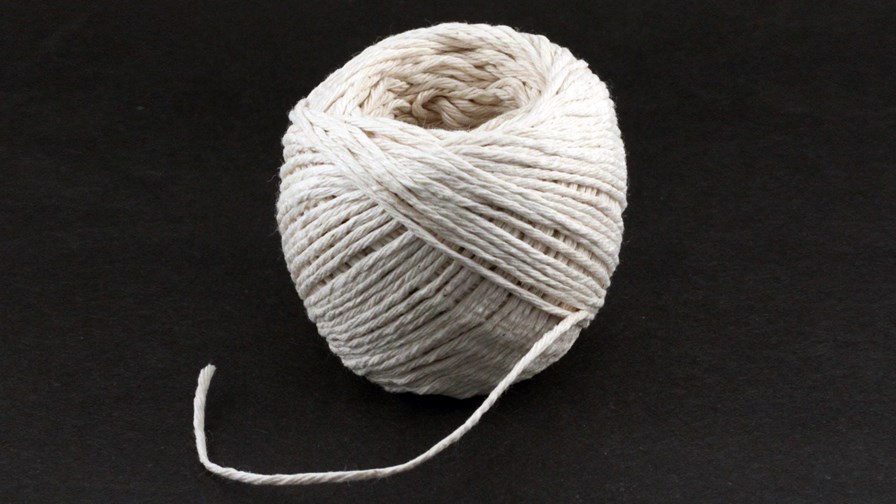 Just add water for Fibrous to the Home connectivity... © Flickr/cc-licence/Stuart B

With research report after research report and survey after survey reinforcing evidence of the UK's lack of vision for and commitment to the provision of meaningful modern broadband connectivity across the country in general and rural areas in particular, TelecomTV can this morning reveal that British boffins beavering away down in Dingley Dell have finally come up with a technological solution that might be the answer to all our Internet access problems. It's cheap, it's not European (none of your French or German or Spanish or other foreign stuff here now you know) and it damned well works! Yes, the dream has finally been realised! Broadband can be provided over piece of wet string!

Those stout chaps at Andrews and Arnold (and what a fine-sounding, thoroughly no-nonsense British company name that is. You can almost smell the tweed and pipe smoke from here) are headquartered in the Royal County of Berkshire, the land of fair play and the Wind in the Willows nestled cosily in the green fields and clean fresh air far to the west of the Great Wen that is the metropolis.

Andrews and Arnold, (also known as AAISP) is an Internet Service Provider that primarily provides broadband services to businesses, SMEs and what it refers to as "technical" home users. It has won awards as the "best niche provider" based on customer feedback and ratings and while a serious business in its own right doesn't exhibit the same po-faced corporate pomposity that characterises so many of the bigger ISPs.

For example, the company is "xkcd/806" compliant, (a reference to the xkcd webcomic edition 806) that, in practice, means those ringing in to AAISP's technical support and saying the magic word "shibboleet" get straight through to an agent fluent in at least two programming languages. What's more, Andrews & Arnold is one of the few UK ISPs able to provide IPv6 to home customers for no additional charge and it will not censor Internet connections.

So, in the pre-Christmas spirit of pushing through the damp, beer-stained envelope of constrained scientific thought and endeavour the Berkshire eggheads have demonstrated to a gobsmacked world that it is possible to provide a 3.5Mbit/s broadband connection over two metres of brine-soaked wet string.

With Brexit looming and with it our imminent return to the groat, the rod, the pole, the perch, the bushel, the peck, the sedan chair and public executions, the eight-year-old lads and lasses of the Indentured Society of Consumptive British Child Chimbley Sweeps will, like the rest of us, have to learn that two metres is, in fact six feet and seven inches of 'Grade A ' British twine. And don't you forget it. It’s a dozen lashes for any man Jack (or woman Jill) who does.

As Adrian Kennard, of AAISP commented, "It was a bit of fun, which one of our techies decided to try out. We have equipment we could test in the office, and why not? There is no commercial potential that we are aware of." Adrian, Adrian, don't sell your achievement short like that. On our right little, tight little island we need all the home-grown innovation we can get.

Adrian Kennard added. "What it does show, though, is how adaptive ADSL really is. This can be important when it comes to faulty lines with bad (or even disconnected) joints still providing some level of broadband service." Yes, well… don't we just know it?

A bit of seasonal fun is fine but when the Christmas festivities are over and the New Year dawns, Britain's broadband goose will still be as cooked in 2018 as it is now at the back end of 2017. A new research paper from GlobalData, the data analytics company, says the continuing lack of access to ultra-fast broadband is inhibiting the growth of the UK economy and is stunting it in rural areas.

As Avi Greengart, Technology Analyst at GlobalData, said, “Delivering new connectivity services is expensive and takes time. Investment focuses on population-dense areas which offer the fastest returns, which threatens to create a wider social divide as economic development will be delayed in rural areas. The duty lies with businesses and governments to ensure this digital divide is not exacerbated.”

He added, “The reality is that many small and medium-sized enterprises (SMEs) and startups in more rural areas will be left out as they will suffer from the lack of availability of affordable ultrafast connectivity. Supporting SMEs is crucial to the growth of the economy and future prosperity.”

Earlier this very week, top management from the UK's telecoms sector (including  BT, Openreach, 02, Virgin Media and Vodafone along with the UK government's Secretary for Digital, Culture, Media and Sport, Karen Bradley) were, yet again, invited to tea and biscuits with Sharon While the CEO of Ofcom, Britain's useless regulator.

The subject for discussion was, as usual, the lack of industry investment in broadband in general and fibre in particular. It is astonishing how many times this pathetic, toothless organisation can keep yapping around the same old loop without coming to any meaningful conclusion or doing anything to spur some action. But, hey, appearance is all, after all.

The fact of the matter is that the digestive biscuits served up to the great and the good have a damned sight more fibre in them than does the UK as a nation. The roll-out of what Ofcom likes to call "full fibre" is indescribably slow (after all, we are only 18 years into the millennium) and so far is available to just THREE per cent of homes in the country.

Britain is falling further and further behind many other countries in the digital stakes and there's no coherent strategy, no sense of urgency no sense of will or determination to do anything meaningful and no apparent intent to use regulatory powers to compel vested interests to improve the lot of business and consumers.

A lamentable state of affairs

Last month, Nick Jeffrey of Vodafone UK called the fibre penetration rate "lamentable" and once more complained about the uncertainty and delay surrounding the auction and allocation of 5G spectrum.

Meanwhile, Openreach, the non-BT BT company with responsibility for deploying the UK's wholesale fibre network continues with its laid back approach to a pressing national problem. It'll sort it all out – tomorrow. However, that "tomorrow" has none of the compelling sense of urgency that the concept of "manana" normally implies .

Only in the UK would the government lump together ministerial responsibility for Culture, Sport, Media and the Digital Society in one over-arching, over-stuffed and unmanageable portfolio. Only in the UK would the endless game of musical chairs that our embattled prime minister is playing result in cabinet ministers responsible for massively important strategic industry sectors being shuffled and replaced every six months or so.

Only in the UK would we have someone in charge of our digital future who knows so little about the subject that she can go on TV to say “It’s about how we make the internet the safest place to be online.” Is that not one of the most asinine statements you have ever heard?

Meanwhile BT continues successfully to shirk its public responsibilities whilst assiduously protecting the interests of its private shareholders and will continue to do so until forced to change by a regulator that is willing to uses its powers for the greater good.

Here's a tip. Come Brexit and as we drift back to an 18th Century all of our own making, it could be a good time to start investing in companies that manufacture semaphore flags. In a few years’ time more and more UK communications will be effected by twirling and whirling banderoles and gonfalons. That way our erstwhile European partners won't be able to tell if we are waving or drowning.