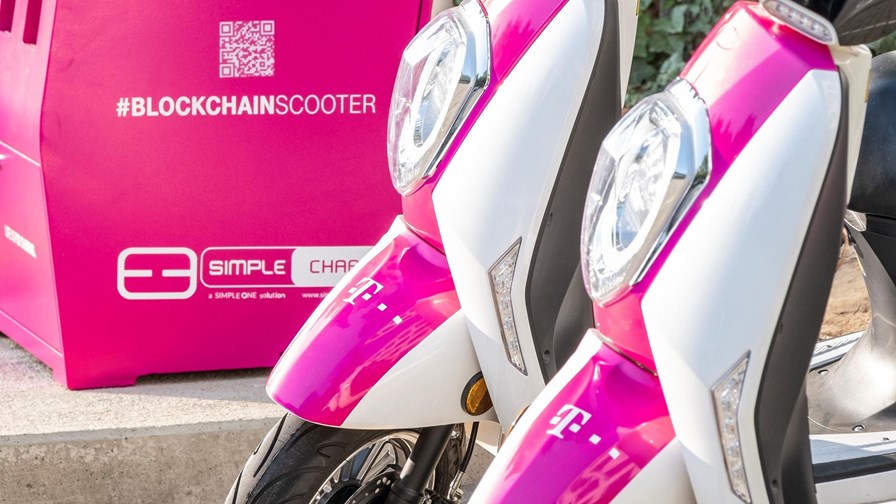 Deutsche Telekom has launched an e-scooter sharing pilot that uses a blockchain to handle user identity and payment credentials.

As the German incumbent explains, with traditional centralised systems, every service a user a signs up to requires them to input and store their personal details and payment information. Multiple logins can be an inconvenience for the user, and storing customer data is an added cost and security risk for the service provider.

In contrast, using a decentralised system like a blockchain adds a degree of separation between the service provider and the customer's identity and payment credentials, making it more secure. It also adds flexibility, because that same information, now stored on a blockchain, can be shared safely between multiple service providers. The end result is that, in this case, a customer can sign in to a scooter-sharing scheme once, and ride off on any participating service provider's scooter.

The pilot is called Xride, and is being run by Deutsche Telekom's innovation arm, T-Labs. It will take place over four weeks at the company's Bonn headquarters, and will be open exclusively to employees.

"In Xride, historically centralised functionalities like identity management, data verification and storage, payments, and charging are fully decentralised. This allows for a less costly, more secure and more efficient vehicle sharing that benefits both providers and the user," said John Calian, SVP and head of T-Labs.

Xride makes use of ståx. Developed by T-Labs, it brings together blockchain technologies into a single operating stack, making it easy to manage between multiple enterprises.

It isn't clear from the announcement which blockchain Xride uses. However, it's worth noting that at the beginning of the year, T-Labs became a full member of Hyperledger. A Linux Foundation-backed group, Hyperledger members develop and promote the use of permissioned blockchains – and associated technology – by enterprises, and so chances are, Xride is using it.

Hype around blockchain has ebbed and flowed over the years, and 2019 certainly seems to have seen a lull in excitement as interest in initial coin offerings (ICOs) has faded.

Nonetheless, there still seems to be plenty of activity, as Xride shows.

"New use cases are emerging, driven by growing awareness of what blockchain is and what it can and cannot do," IDC said, adding that identity management in particular is on the rise in Europe. "With data emerging as one of the most valuable resources, it is becoming crucial for companies to have an effective and safe way to store, secure, and use consumers' personal data. Blockchain offers a decentralised and encrypted system to do this and it is now being used for a range of purposes."

It seems you can now add e-scooter sharing schemes to that range of purposes.