US smartphone sales were down 6% YoY in Q1 2021, according to Counterpoint Research’s latest data from its US Monthly Smartphone Channel Share Tracker. Premium device sales slowed after the holiday quarter, continued supply constraints affected both 5G and LTE devices, and tax season sales were weaker as Q1 2021 saw added stimulus money boost.

Commenting on the market performance, Research Director Jeff Fieldhack said, “While Q1 2022 did see weaker sales compared to last year, this needs to be seen in context. It is not a sign of the market contracting because last year’s Q1 was unusually high due to several factors driving demand. Apple’s iPhone 12 series sales pushed into Q1 2021 due to its staggered launch causing higher premium demand in a usually soft quarter. $1,500 stimulus checks were also given out, which helped boost the economy that was suffering from COVID-19 impacts. LTE sales saw an uptick due to tax-season discounts and pent-up demand in Q1 2021. Looking at Q1 2022, there were still solid performances from Apple and Samsung, with Motorola, Google, TCL and OnePlus seeing YoY increases in volumes due to LG’s exit.” 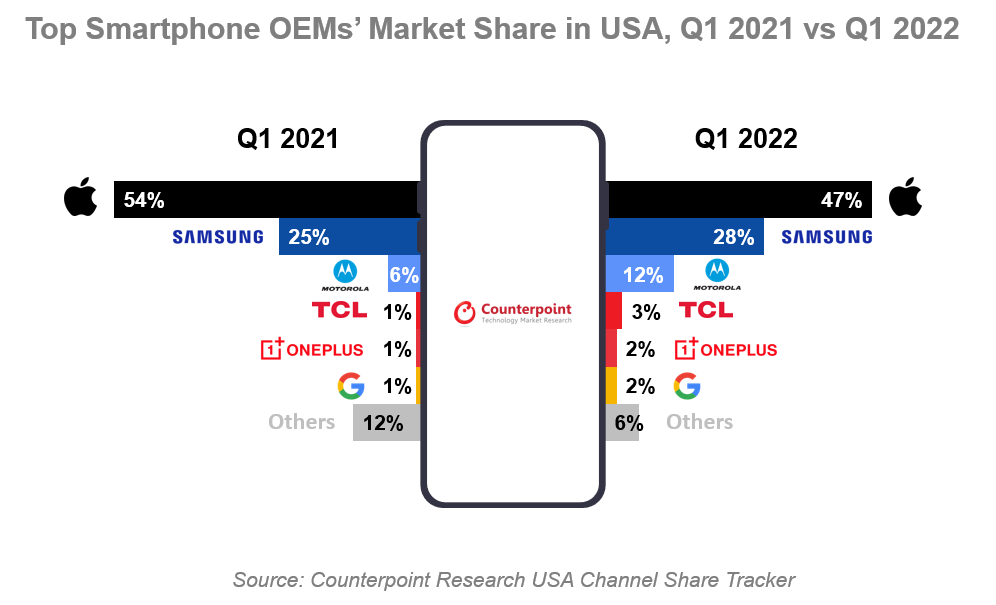 Commenting on OEM dynamics, Research Analyst Matthew Orf said, “Apple and Samsung continued to dominate the market with a combined 75% share and had some of their best performances to date. However, some attention should also be brought to smaller OEMs that are beginning to capture more mindshare of consumers due to LG’s exit. Motorola has been very aggressive, becoming the third largest OEM in 2021. In Q1 2022, its market share reached 12%, the highest quarterly share to date. Motorola is refreshing its G series with new 5G devices in Q2, the Moto G Stylus 5G 2022 and Moto G 5G, which will help the OEM increase its 5G sales in 2022. TCL also made big gains in market share to reach almost 3%. While known for its TVs, TCL has been putting in extra marketing efforts to win mindshare in prepaid channels. It won several SKUs at Metro by T-Mobile, with the TCL 20 XE and TCL 30 XE 5G helping it gain market share. OnePlus did grow in share YoY, but the OEM had a slow quarter overall as the increased low-end competition resulted in contracted sales. The launch of the OnePlus 10 Pro has been relatively weak, but the OEM hopes to recapture some share with the new N20 5G that will launch in early Q2.”

Commenting on the US market outlook, Senior Research Analyst Maurice Klaehne said, “There are certainly some headwinds coming which may impact the outlook for the rest of 2022, but we remain cautiously optimistic. The US GDP fell 1.4% in Q1 2022, but consumer spending actually rose 2.6% YoY. Smartphones are often insulated from inflationary pressures, especially higher-end devices from Apple and Samsung. But the low end may be more affected in the coming months due to less attractive deals or promotions. COVID-19 lockdowns are once again resurfacing in parts of Asia, but they have not impacted supplies so far. There will also be massive network migrations occurring as 2G and 3G sunsets come to fruition this year. This will certainly give a lift to smartphone sales as carriers will need to move millions of subscribers to LTE or, preferably, 5G smartphones. MediaTek has been slowly gaining share in the US market, reaching 37% share in the Android segment in Q1 2022. We expect further increases in its share in 2022 as lower-end LTE and 5G smartphones are shifting to MediaTek chipsets. Recently, Motorola, white-label devices from AT&T, T-Mobile and Boost, and select Samsung devices such as the Galaxy A03s have switched from Qualcomm to MediaTek.”