As part of the expansion of the LTE platform to new services, and to keep track with the increasing needs of the automotive industry, 3GPP is developing functionality to provide enhancements specifically for vehicular communications - both in terms of direct communication (between vehicles, vehicle to pedestrian and vehicle to infrastructure) and for cellular communications with networks.

The initial Cellular Vehicle-to-Everything (V2X) standard, for inclusion in the Release 14, was completed last week - during the 3GPP RAN meeting in New Orleans. It focuses on Vehicle-to-Vehicle (V2V) communications, with further enhancements to support additional V2X operational scenarios to follow, in Release 14, targeting completion during March 2017.

Overview of the completed features

V2V communications are based on D2D communications defined as part of ProSe services in Release 12 and Release 13 of the specification. As part of ProSe services, a new D2D interface (designated as PC5, also known as sidelink at the physical layer) was introduced and now as part of the V2V WI it has been enhanced for vehicular use cases, specifically addressing high speed (up to 250Kph) and high density (thousands of nodes).

To that end, a few fundamental modifications to PC5 have been introduced.

Firstly additional DMRS symbols have been added to handle the high Doppler associated with relative speeds of up to 500kph and at high frequency (5.9GHz ITS band being the main target). This results in the sub-frame structure illustrated in Figure 1.

As illustrated the V2V sub-frame for PC5 interface has 4 DMRS symbols, in addition to the Tx-Rx turnaround symbol at the end, allowing for better tracking of the channel at high speed.

Secondly a new arrangement of scheduling assignment and data resources has been agreed. The arrangement is illustrated in Figure 2 and is designed to enhance the system level performance under high density while meeting the latency requirements of V2V. Scheduling assignments (SA or PSCCH) are transmitted in sub-channels using specific RBs across time. Data transmissions associated with said scheduling assignments are occupying adjacent RBs in the same subframe. Note that another variant where SA and associated data transmissions are not necessarily transmitted on adjacent RBs has also been standardized. 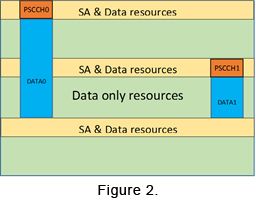 Finally for distributed scheduling (a.k.a. Mode 4) a sensing with semi-persistent transmission based mechanism was introduced. V2V traffic from a device is mostly periodic in nature. This was utilized to sense congestion on a resource and estimate future congestion on that resource. Based on estimation resources were booked. This technique optimizes the use of the channel by enhancing resource separation between transmitters that are using overlapping resources.

The design is scalable for different bandwidths including 10 MHz bandwidth.

Based on these fundamental link and system level changes there are two high level deployment configurations currently defined, and illustrated in Figure 3. 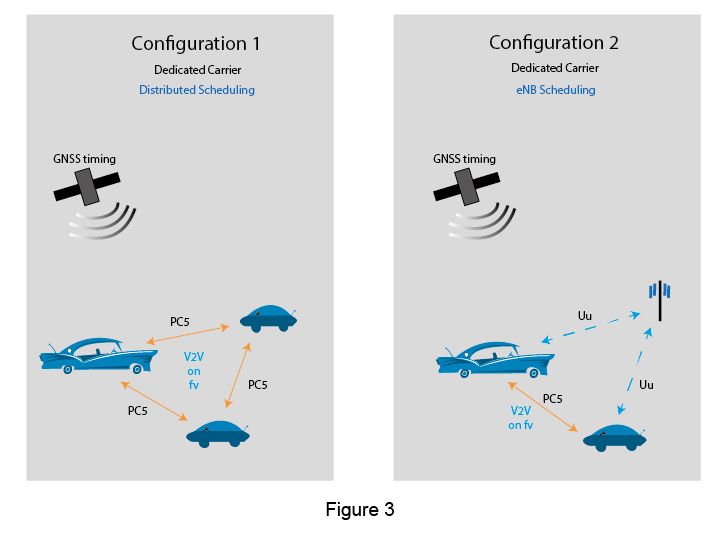 In “Configuration 1” scheduling and interference management of V2V traffic is supported based on distributed algorithms (Mode 4) implemented between the vehicles. As mentioned earlier the distributed algorithm is based on sensing with semi-persistent transmission. Additionally, a new mechanism where resource allocation is dependent on geographical information is introduced. Such a mechanism counters near far effect arising due to in-band emissions.

In “Configuration 2” scheduling and interference management of V2V traffic is assisted by eNBs (a.k.a. Mode 3) via control signaling over the Uu interface. The eNodeB will assign the resources being used for V2V signaling in a dynamic manner.