Along with the fast development of the global MBB (Mobile Broadband Business) network, operators require more spectrum resources to deploy 4G LTE network widely. In 2015, the total auction price of 4G spectrum in Germany reached up to 5.08 billion Euro. The spectrum resource is so expensive. Besides the high quality voice and data services on the existing 2G/3G network, we also have to continually improve the 4G network’s coverage, capacity and throughput. How to fully utilize the limited spectrum resources becomes an important research task. 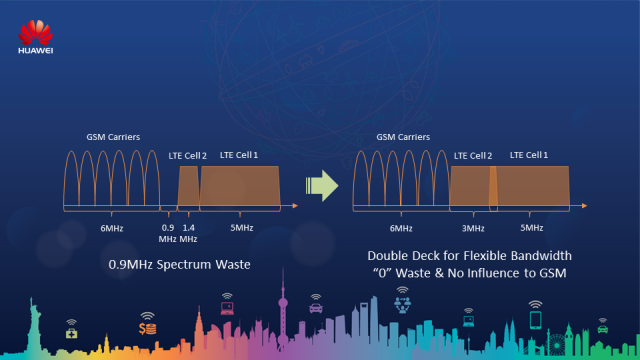 Double Deck has already been deployed in Guangzhou and Jinan China. Before, the GSM 10MHz + LTE 20MHz network is deployed in band 1.8G. More spectrum released from GSM is non-standard bandwidth for LTE. Only a LTE cell of 5MHz bandwidth could be deployed, which can’t meet the 4G users’ requirements of capacity and experience. Without new spectrum resources and hardwares, Double Deck realizes the efficient spectrum convergence between two LTE cells. The two cells 20MHz + 5MHz LTE network has been evolved to 20MHz + 10MHz. No spectrum sharing between LTE and GSM, the 4G users could get the best experiences. Two Carriers Aggregation of 20MHz + 10MHz is realized in the existing 4G network immediately. Compared with one carrier of 20MHz, the user DL peak throughput has been increased by 43%, which is up to 212Mbps. The LTE user ratio, whose average throughput is more than 60Mbps, has been increased by 66%.

Devoted to the continuous improvement of the network’s spectral efficiency, Huawei Double Deck helps the operator to break through the spectrum limitation, and realize the LTE network deployed with flexible bandwidth, which will bring the global users a better mobile internet experience.

The Seventh Annual Mobile Broadband (MBB) Forum will be held in Tokyo, Japan on November 23 to 25, 2016. The world's top operators along with key industry decision-makers, policymakers and influencers will attend to discuss the hottest trends in the MBB ecosystem, and explore the future of mobile broadband. For more info, please visit http://www.huawei.com/minisite/hwmbbf16/en/index.html